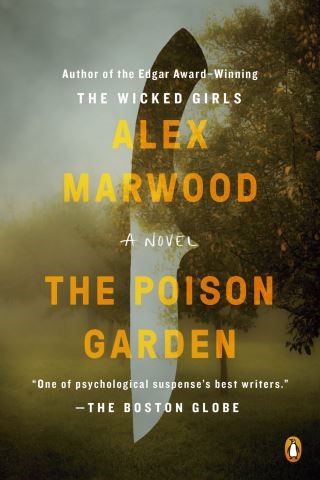 When nearly one hundred members of The Ark, a sinister apocalypse cult are found dead by poison at their isolated community in North Wales, those left alive are scattered to the winds with few coping skills and fewer answers. For twenty-three-year-old Romy, who has never known life outside the compound, learning how to live in a world she has been taught to fear is terrifying.

Now Romy must start a new life for herself--and the child growing inside her. She is determined to find the rest of her family and keep her baby safe, no matter the cost. But as the horrors of her past start to resurface, she realizes that leaving her old life behind won't be easy. Outside the walls of The Ark, the real evil has only just begun.

A brilliantly plotted, page-turning novel from "one of psychological suspense's best writers" (The Boston Globe), The Poison Garden will leave you stunned.

Alex Marwood: Alex Marwood is the pseudonym of a journalist who has worked extensively across the British press. Her first novel, The Wicked Girls, won the Edgar Award for Best Paperback Original, and was nominated for the Macavity Award for Best Mystery Novel and the Anthony and ITW Awards for Best Paperback Original. The Killer Next Door, her second novel, won a Macavity Award for Best Mystery Novel, was nominated for the Anthony and Barry, and has been optioned for film by James Franco and Ahna O’Reilly. Her third novel, The Darkest Secret, was published in 2016. Marwood lives in south London.